It is safe to say that I’ve spent a decent amount of time on airplanes &, being who I am, I’ve spent a long time observing people’s behavior & actions while on board. I’ve decided to compile a list of tips that might help anyone reading this when they take their next flight. Keep in mind that these things are taking into account that airplanes are extremely dirty places & since you’re sharing a tiny space with hundreds of strangers, they are in fact public areas. Some of these things might seem obvious to you, but from my observations, most people (I’d say 80%+) do the opposite of these points.

Be patient. While air travel is extremely convenient & is a crucial part of our fast paced world, the act of getting an aircraft full of hundreds of people from point A to point B is extremely complex & the list of things that can delay this process is endless. Understand that you are only one of the very many people on the flight so the people at the check in desks, boarding agents & cabin crew might not respond to your request immediately or in a time frame that you might like, but believe me, they are doing their very best.

Ditch the neck pillow. This is something I see every time I fly. People bring neck pillows on board & probably 90% of these people don’t use them. They end up on the floor & thus becoming a tripping hazard & collecting all kinds of bacteria. Unless you know for a fact you will undoubtedly use it, leave it at home; better yet, save your money & don’t buy one.

Bring some wipes. The reason behind a few of these points goes back to the fact that commercial airplanes are filthy places. Yes, they get cleaned, but due to time constraints, most things get missed altogether. Bring some disinfectant wipes along with you to wipe down the tray table, arm rests & in-flight entertainment controller/screen. You might look like a germaphobe, but your immune system will be grateful.

Don’t be rude to the crew. Airline crew are there to get you to your destination safely, that is the purpose of their job. They are not your slaves, you do not own them. Most airlines add services as a benefit, not a requirement. People seem to have the wrong idea about this. While flying can be extremely stressful for some people, you might be exhausted, you may have gotten a seat you didn’t want (or didn’t pay for), maybe they ran out of chicken by the time they got to you & sometimes flights are delayed for hours on end, I understand that these things are tough/annoying, but the crew are not the ones responsible for these situations. I see so many passengers shouting at some poor soul who happened to walk passed at the wrong time. The crew have work stress, they have their own personal struggles, they are trying to make a living for themselves & most of the time they can do absolutely nothing to change your situation. If you do have a complaint, you’ll have far more success contacting the company’s customer care department. On the topic of airline employees, you’d be surprised how far a ‘please’ & ‘thank you’ will go. Better yet, try saying something like “Have a good day” and say the name on their name badge. 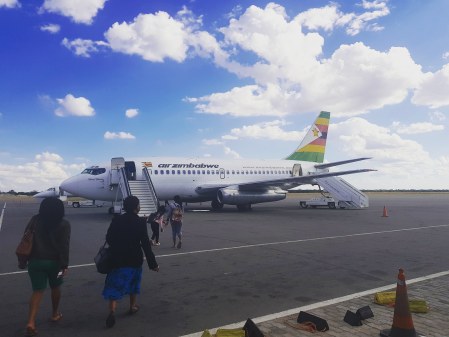 Wear shoes when you go to the lavatory/restroom. Have you ever seen that ‘water’ on the floor of an airplane bathroom? Yeah, that’s not water. Now this point is something that blows my mind because every time I mention this to someone, they will say how disgusting it is to use the bathroom barefoot or with socks on; however, on your next flight, watch the people going in & out of the lavatory. 8 out of 10 of them (if not, more) will be barefoot or just wearing socks.

Avoid the bubbles. While sipping champagne at 40,000 feet is considered luxurious living, it will probably make you feel uncomfortable. Any carbonated beverage will make you feel bloated, more than you already do. Drinking plenty of fluids is a good idea, but stick to juices & water.

Bring a pen. This comes in so handy especially if you’re on an international flight because many countries require you to complete arrival cards & having your own pen saves you from having to borrow one or using the communal ones at the airport.

Don’t stand up. This goes out to the people who stand up as soon as the plane lands, where are you going? Aside from this being dangerous, give this a thought. The pilot needs to take the aircraft to the gate & park, the cabin crew need to be released from their seats & disarm all the doors on the airplane, then the stairs or bridge needs to safely be connected to the aircraft & then the doors get opened & then all the passengers in front of you need to disembark. All of this takes time. You could use the excuse that you are in a rush, but you’ll get through immigration or baggage claim at roughly the same time as the last person off the aircraft. Standing with your neck tilted & your back bent cannot be comfortable, just sit a few minutes & then leave.

Your trash doesn’t disappear. Be mindful that someone has to come & pick up all the trash you leave behind. If we can help make someone else’s job easier, why don’t we? If you have some packaging or plastic with you, take it & dispose of it in the airport wastebin.

Keep spare underwear. A good idea is to keep an extra outfit & underwear in your carry on/hand luggage because your suitcase might get lost & show up a day or two later. Having the spare clothes makes the world of a difference in these situations, believe me. This has happened to me a few times.

I’m sure you can tell, I have a lot to say on this topic, but I’m going to stop here as this post is already double the length of my normal posts. I hope this helps you on your future flights & if you have any other questions or tips, feel free to leave them in the comments or contact me directly.